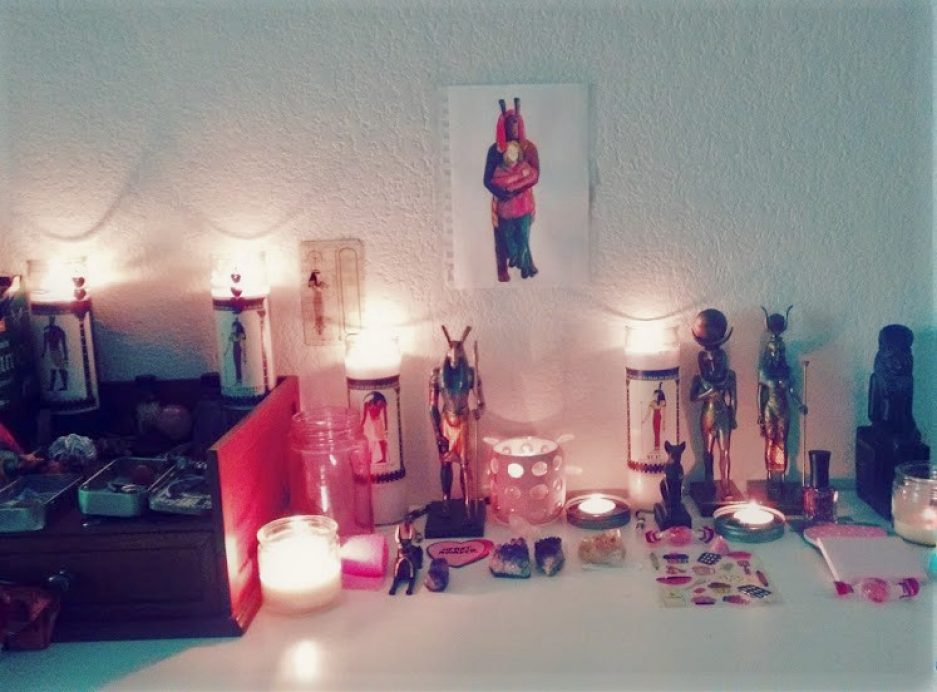 A couple weeks ago, my friends E and B were helping me move across town and haul boxes. B rode with me because E’s car was full with furniture, and we got to talking about our recent spiritual experiences…

B told me about reconnecting with their spiritual foundations by reviewing original texts and starting a new creative project for themself referencing those texts. I described some of my spiritual relationships. I told them how I’ve been really interested in cosmology (spirit-universe structure), interpersonal relationships of all kinds, and how degrees and layers of unity and separation create personal and interpersonal identity. After hearing this, B said,

“It makes sense that you would be interested in that, because it sounds like you’ve spent a lot of your life sort of fragmented.”

Maybe it’s odd that this assessment startled me– I’ve been very open with my friends and even online about my complex ptsd, personality disorder, neurodiversity and my experiences of under-supported, and under-developed identity. I guess it had just not occurred to me to frame it that specific way as a motive. My personal development and interests, as the person experiencing them, simply feel natural to me.  However, it’s probably accurate.

Synchronistically, I’m listening to The Adventure Zone, by Griffin, Travis, Clint, and Justin McElroy, and the “The Stolen Century” episode in which (I’ll try to avoid spoilers) an important narrative device is explained to be powered by bonds… And I realized that this is another way of describing relationships– relationships of love, power, friendship, social obligation, oppression, solidarity, etc. — but also systems of internal mental and emotional workings.

I’ve asked Set and Loki before about soul bonds and spiritual relationships– “twin souls” and soul mates. Each has tried to explain to me, but still to no real concrete understanding on my part. Maybe this is because my desire for understanding fixates on having some sort of diagram laid out in front of me, to sooth my ego’s self-doubts of the information I am receiving.

I gather that Set and Nephthys are “twin souls,” and through my connection with her, I also have a connection to Set in this way (as does at least one other incarnated shard of Nephthys I’ve encountered). But as for what twin souls are, it appears to me a consciousness that splits apart at some diverging point in order to experience a contrast in itself as another person. This divergence contrasts almost to the point of dualism, and co-mirroring sort of relationship, but each soul retains the core essence of the original soul. It is merely their paths of inherited learning, experience, and karmic trace paths that are different. These karmic trace paths also mirror each other in order to bring the twin souls back together at important intervals in their development….

At the end of their period of learning as separate beings, the souls re-align and merge again… And for this path, this “mirroring/merging” energy is highly charged in all aspects of this kind of relationship (which, I guess, might be why in human relationships, these bonds can end in codependency, violent separation, and each triggering the other into soul-searching and transformation).

I sense that the karmic exchanges and bonds between soul mates have a higher degree of variance and mirror only in parts– with a further degree of separation, as if they meet, not at half moon intersections, but diagonally, at corners of their soul paths… These relationships are not necessarily marked by the passionate yearning to “merge” as the twin soul relationships seem, to me, to be. However, they can be supportive, close, challenging, and take many forms from professional to romantic or platonic.

I also gather that, if more than one shard of a being, or soul, is incarnated into a human being (more common than you might think), that human person can have more than one set of twin souls and soul mates.  (Yes, multiple twin souls!)

Anyway, these are my thoughts lately. Sorry I don’t have the time or energy to polish them up a bit more for you, but I’ve been busy with two job changes, being sick, and a move. Also, I have another long post I’m working on for you and I don’t want to leave a lot of unfinished and backed-up posts in my drafts.

So I hope you enjoyed this. I’ll write again soon.

Of The Heart Road